What’s the Difference Between Tapas and Pintxos? 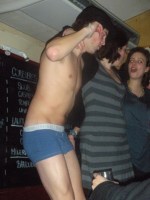 Moving on from Bordeaux to Toulouse in the evening meant I got to enjoy a late meal of tapas and sangria with my friend. We shared Iberian ham, Manchego cheese, these tiny, deep fried fish that were whole and still had eyes, slices of chorizo, and of course, a pitcher of sangria. The restaurant was down a very quiet street, but completely filled with locals…the crazy kind. In fact, when the music began to pump through the place around 11:30 or so, some of the younger people at the table behind us de-robed briefly to dance on the tables. See? 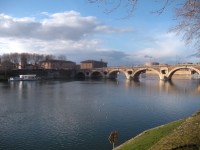 Toulouse was a fantastic little town, and an interesting departure from both Paris and Bordeaux. Yes, I was still technically in France, but their way of life is more akin to Spain. Life gets started later in the evening, and they share a lot in common with their neighbor to the south. The proximity might have something to do with it. We woke up on Saturday morning, jumped in the car, and drove from Toulouse to Barcelona in just under three hours. That’s where I’d learn the difference between tapas and pintxos. 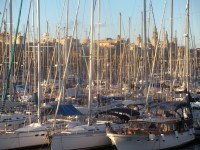 Both styles of food share a convivial spirit, whereby they’re eaten in a social setting. The difference, I’d find out, is that whereas tapas are smaller portions of food that are meant to be shared, pintxos are literally finger foods from the Basque region of Spain. For pintxos, you stand at a tavern bar with a small glass of wine and grab what you’d like from the displays. “Pintxos” literally means “spike,” and each of the pieces of bread with toppings are stuck with a toothpick. It helps to hold the food together, and then the bartender counts them on your plate and charges you accordingly. 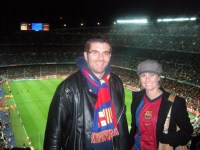 In the tavern where we ate, there were lots of pintxos options, and most had fish. Common toppings include hake, cod, anchovy, but I preferred a pintxos with smoked salmon and a dollop of sauerkraut, or something like it, on top. Other options were olives, stuffed peppers, croquettes, and tortilla de patatas. Don’t be fooled by the name though… “tortilla” in Barcelona is nothing like our tortillas at home. It’s actually an omelet. Pintxos are great if you’re hungry for something small (like we were before the FC Barcelona game last night), and also an interesting way for groups of friends or family to crawl around the town from one place to the next.

Today was a rather busy day, and we finished it off with churros con chocolata at home. Wowsers. After the major injection of sugar, we’re trying desperately to stay awake for the Superbowl tonight. It starts at midnight, and we’re going to a place called Obama Bar to watch it. How ironic is that?

Barcelona was really fabulous, and in the short time I was here, I did a lot. I attended the soccer game last night against Getafe, we hiked up to Park Güell today for a picnic of Iberian ham sandwiches and had views of the entire city, and then we rented bikes and cruised along the boardwalk and all around the city center. Tomorrow morning, we’ll make a quick stop at Boqueria Market, and then it’s off to the airport in Girona. Barcelona…you have been great to me, and I will undoubtedly be back for paella, soccer, mojitos, tequila shots with orange slices and “canarella” (inside joke), and of course, more of those fantastic pintxos and sangria.