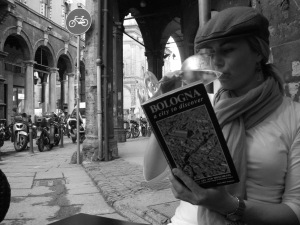 Then: At 5:30 a.m. on a Tuesday, I was rattled from my sleep with an idea. The sit-up-straight-out-of-bed kind of idea. Instead of setting up shop at one French cooking school, what if I hopped around the European continent and sampled from a variety of courses in different cities and countries? That’s how Culinary Hopscotch was born. Follow me on an epicurean tour of cooking schools in countries around Europe and beyond. I’ll be traveling and cooking for about three months, so if you’re curious about where I’m headed, just ask. Otherwise, I’ll be updating my whereabouts in the Twitter section on the right. The culinary crusade starts on January 29, 2010, and I’ll be doing it all in a carry-on.

Now: We live in Portland, a culinary capital in its own right. I man the stove chez nous and plan our meals weekly on a colorful pad from Anthropologie. Things have changed a bit from the old school days of Culinary Hopscotch, but it makes sense (to me) to keep it alive. Look for posts on restaurants we visit, culinary happenings in the news, what’s on the menu in our kitchen, and more!