When a Pole flicks his/her neck, it means they want to have a drink of vodka with you. When a Pole hands you a map of Krakow and directs you to their favorite “milk bar” for pierogis, you go. I like Poland. It’s forceful from an F & B perspective, and I can get behind that.

I showed up at Pod Filarkiem on the advice of Agnieszka and Lukesz, my unbelievable hosts. This place doesn’t look like much from the outside (or inside for that matter), but with the throngs of patrons lined up, it becomes immediately obvious that’s not the point. It’s 100%, bonafide Polish, and that’s all they speak here. Some of you are likely thinking, “Kyle, you don’t speak Polish.” But for those of you who know my obsession with foreign languages, you’re probably thinking to yourself, “Who cares, self. I’m sure Kyle waltzed right up and knew what to say.” If you thought the latter, well, then you’ve already earned your first demerit badge of the post.

Lucky for me, I was sent with a cheat sheet, and Agnieszka, Lukesz and I had a rather comical phonetic discussion over breakfast so I’d know how to pronounce things. I had my notes, but I was nervous. Thinking to myself, ‘This woman will never see me again,’ I took a deep breath, glanced at my pronunciations, and gave it the old college try. She seemed to know what I was saying, but as these things go, my Polish was far from perfect. I ended up with an order each of pierogi ruskie and pierogi z mięsem, and there are probably 20 in each order. Alas, my call for a “po porczi” (half order) of each fell on deaf ears, and I’m currently sitting across the table from a woman (it’s all common seating) who is staring at me like I’m Kobayashi.

The good news is, I think I finally found a place where they don’t immediately know I’m foreign, with the exception of the people at the counter. Numerous people have (presumably) asked to share my table in Polish, and I just nod with an “I don’t have a clue what the $@!# you’re talking about” look, smile, and nod, and they sit down with me to stare at my gluttonous feast. 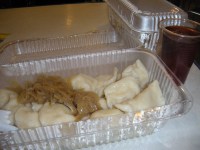 So, pierogis…what are they? I guess the best way to describe them are like tortellonis or gyoza. It’s a fairly delicate layer of dough wrapped around fillings, in my case cheese and meat. Both orders came topped with a small pile of grilled onions, and they seem to be relaxing in a butter bath. But not too much. They’re fantastic, fresh, and affordable little dough purses that will help me shove on in Krakow until I head to the train station tonight…with my second container of pierogis. Luckily, I also misunderstood the “for here or to-go” question, and mine showed up in takeaway boxes.

I’m quickly (and thankfully) learning that native foods are the reigning champs when traveling, especially if you can get directed to a locals-only joint. If pierogis are as easy as they look to make, don’t be surprised if you find a Polish plate in front of you at my house. I’ll spare you the leftover Communist stoicism that the counter servers here have perfected, and if you’re lucky, I won’t even make you order in Polish. Na zdrowie!