We woke up on Monday with God crying all over Rome. Was he trying to rain on our parade, or force us inside for one helluva day? Well, I don’t know. But the fact is, when in Rome, a cooking class at Le Fate is a must on your agenda. 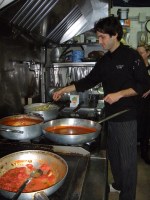 Chef Andrea Consoli led our class of eight people in one of the tiniest restaurant kitchens I have ever seen. To him, it was heaven, and it was obvious how much he loves his job as a chef and teacher as he whisked around the itty bitty space teaching us the recipes for the aforementioned dishes. We would be his pupils and guests in the restaurant for a solid five hours.

One of the most amazing things I learned had nothing to do with the recipes, per se. It was how to choke-down a four-course meal. As we sat down for course #1, Chef came out with a bottle of Frescadi Spumanti, and filled our glasses before we woofed down our pizzas. The reason for this bubbly choice is to open up your stomach at the beginning of a big meal. He hit the nail right on the head when he said, “Sometimes, as a chef, you go through the process of cooking a huge meal, and after, you’re not even hungry. It‘s definitely from tasting as you go, but even the smells can trick your brain into thinking you‘re full.” That happens to me ALL THE TIME. I couldn’t believe I finally had an answer to a question that’s been bothering me for years.

The Spumanti trick worked. Sitting down a relatively full individual, after bottoms-upping my bubbly, I was primed and ready for the impending courses, which were fab-u-lous. We learned to make two kinds of tomato sauces– one canned and the other from fresh tomatoes. And I hearby declare the following: I will never put garlic into my fresh sauces again, and will always use a mirepoix in my canned ones instead of a pinch of sugar. I will only cook with the best tomatoes that I can find, and if I have to, I will import them from Italy for the Selenium content that is rumored to help you live a long life. I will also never purchase gnocchi again, but will make it by hand on Tuesdays and serve it on Thursdays. Lastly, I will suck up my distaste for coffee and make The Senator Tiramisu whenever he wants it because even I can admit when I’m wrong…this was good.

Le Fate Restaurant (it means “the fairies”) was certainly off the beaten path in Trastevere, but everyone in the class agreed that it was worth the hike. Even the two most junior members of our class…an eight- and twelve-year-old. They were engaged the whole way through like the rest of us. Chef Andreas was passionate about his craft in a way that was refreshing, and in this “Zero Kilometer” restaurant (that means that everything in the restaurant…wine, produce, meat…comes from the Lazio region of Italy), you could tell that when you’re there for dinner or a cooking class, you’re family.