Twitter Facebook RSS Feed
← A New Take on an Old Favorite: Fish and Chips Hold the Deep-Fry
Find Yourself the Spice Monkey →

I woke up this morning to find it was pissing down rain in London. And I mean pissing. A friend’s house flooded overnight (sorry Megs!), and there I was with a pair of Havaianas and no umbrella. That’s what happens packing-wise when you mix an Italian trip with temperamental England.

Nevertheless, V dressed me in some shoes and a jacket, and off I went in search of Books for Cooks near Portobello Road. I made it there just fine. The shoes, on the other hand, weren’t so lucky. Drenched, I entered the cooking shop looking halfway homeless and certainly dejected; this was about to be some cooking class.

After killing about 15 minutes inside waiting for the class to start, we headed upstairs to a small loft-style cooking studio. 22 chairs sat facing the kitchen, and there was a rear-view mirror type apparatus so we could see what Chef Jenny Chandler was doing. This class was totally demonstration-based, which I can’t remember if I knew or not, but nevertheless, I was happy to sit back and watch someone else do the dirty work after my trying morning commute.

Chef Chandler whisked around the kitchen and was quite a crack-up with her random anecdotes. She had worked as a sailing boat chef for eight years, and one of her funniest stories was when the captain rushed down to the galley, screaming at her in Italian about how she had created incest with the onions, the “big brother,” and the garlic, the “little sister.” The moral of his story was that you don’t ever put both in the pan at the same time. The “big brother” should go in first and then the “little sister” can be added later. This little pun amounts to a recipe for not burning garlic. We all had a good laugh. 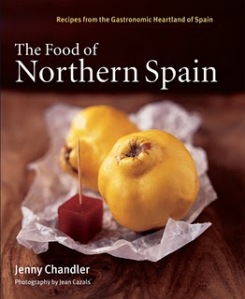 Today’s menu was Spanish tapas, or small plates for the less iniated. In about three hours time, we watched her make Piquillos Rellenos de Queso de Cabra (Goat’s Cheese Stuffed Piquillo Peppers), Calamares a la Plancha (Griddled Squid), Mussels with Chorizo and Cider, Tortilla de Espinacas (Spinach Tortilla), and Empanada (Galician Flat Pie). What took the full three hours to make took about 20 minutes for us all to devour; it was fantastic.

Some of the more random things I learned today are the following:

1. Madrid has the biggest fish market in all of Europe yet is approximately 400 KM from the sea.
2. The Spanish eat the 2nd most fish in the world per capita after the Japanese.
3. Pork is the most popular meat in Spain.
4. In Spain, they have special tortilla turners. It’s like a plate with a knob you can use to flip the tortilla from the frying pan. They can be found in hardware stores.
5. Cider is extremely popular in northern Spain and there’s a special technique for pouring it. Bartenders hold the bottle high above their heads in one hand and the glasses low by the opposite hip. They pour the cider without looking at either the bottle or the glass, and this whole dog and pony show allows the cider to breathe. Oh, and they drink it like shots!

Minus the rainy morning, today’s class was really fun and informative. Tapas are such a great thing to have in your back pocket if you’re entertaining or just don’t want to create a massive meal, especially if you’re cooking for just two. After finally drying out and warming up a bit, I was getting kind of antsy. Sitting through a demonstration-style class isn’t for everyone, and I found myself shifting in my seat a few times because I wanted to get up and prep or clean up the dirty dishes. It’s a great way to learn though because you can pay attention the whole way through, but I still I think I prefer the hands-on style of learning better.

Tomorrow, I’m off to India. Okay, not really, but the journey on the tube will seem like it since it’s so far from where I’m staying. Once there, anything is possible. Curry in a hurry? saga paneer? Onion bahji? Soon, we will all find out!

Posted in Uncategorized. Bookmark the permalink.
← A New Take on an Old Favorite: Fish and Chips Hold the Deep-Fry
Find Yourself the Spice Monkey →