This dessert came from a picture in my head, and sadly, I’m without photos of its fruition this past weekend. I apologize for that and the stock photos below, but I felt inclined to give you something to look at. It sounds weird, but brownie sundaes with burrata and balsamic glaze were the perfect end to a fantastic dinner with friends.

Tasked with the dessert portion of the menu, I wanted to come up with something new and different. I started thinking about what to make, and easy and traditional just didn’t seem right given the guest list. If you took attendance, you’d find that 2/3’s of the table were foodies, worked in the food industry, or some combination thereof. In fact, in thinking back to the previous dinner party at our hosts’ house, the burrata cheese appetizer she made came to mind. 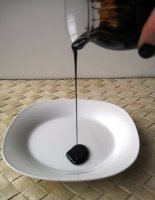 Much discussion had centered around that burrata we’d had a few weeks prior, so I wanted to incorporate it into my dessert. But how? Burrata is a traditionally savory ingredient, and I was to be making dessert. I mulled it over, and then over again, and thought, ‘why couldn’t this silky-in-the-center mozzarella from the water buffalo take the place of ice cream?’ Made with milk and cream, it seemed like a perfectly suitable stand-in.

And it was. I was pleased that the dessert came together as I had imagined because I didn’t have time for a trial run prior to arriving. Fortunately, it was perfect: a layer of the burrata over the sweet chocolate brownie base was topped with a touch of fleur de sel and a balsamic glaze I had reduced earlier in the day. The dessert touched three of the five basic tastes, sweet, salty and sour, and in my opinion, seemed like something you would find on a high-end restaurant’s menu. Molto bene!