Just Another Sunday in Paris 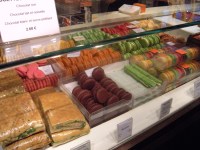 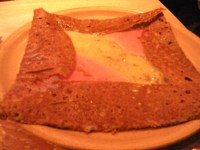 Today was a little bit random. I didn’t have anything solid planned culinary-wise, so I slept in and then blazed my own trail around Paris. For two days now, I’ve been on the prowl for a particular spice shop that has alluded me, so I figured I’d give it one more go. It’s still out there…somewhere. You can run little spice shop, but you can’t hide– I WILL find you. When I finally gave up, I kept walking and bumped into Marche aux Enfants Rouge. It is a pretty small outdoor market with a decent amount of food stalls. I didn’t need anything, but poked around and noticed all of the little enclosures off the stalls with tables. They were all packed, and I presume the patrons were noshing on what they had bought at the market.

From there, I continued on my way. After figuring I was nowhere near the spice shop (that‘s just a guess), I turned around and saw Cirque D’Hiver in the distance. It was time for it to start, so I walked down and got a ticket for €10. The ring was micro compared to Ringling Bros, where I haven’t been in probably 20 years, but the talent was phenomenal. My palms started to sweat when the trapeze artists did their thing, and these three acrobat men did a bit that required the strength of a bevy of Clydesdales. That would be them in the picture on the left. I digress…this has nothing to do with food.

After the circus, I pulled up Google Maps and discovered I was really close to Breizh Café. I knew it was open on Sundays, and despite telling myself I wouldn’t buy any food today, I couldn’t resist. Breizh is rumored to have some of the best buckwheat crepes in all of Paris, and I would completely agree. I had a jambon (ham) and fromage (cheese) crepe and a glass of white wine, and stopping in was a wise decision. Further validating this detour was the fact that Pain de Sucre was just around the corner.

In December, Budget Travel ran a culinary advent calendar of Paris where they featured a different place each day. That’s how I found out about Pain de Sucre, and also about the boulangerie later on. Here, they have macarons and gourmet marshmallows, and while I’ve managed to restrain myself from the macarons (salted carmel and chocolate mint), I couldn’t resist biting into the pistachio marshmallow I purchased. O.M.D (Dieu). Silky. Savory. Sweet.

Update: I inhaled the salted carmel macaron after dinner tonight, and it was the best portable dessert I’ve ever tasted.

Heading back to Montmartre, I exited the metro at Abbesses. It’s one of the oldest and deepest metros in Paris, and still has the original Guimard style glass covering. It’s one of only two left that do, Port Dauphine being the other. It’s also a hop, skip and a jump from Coqueliocot, a fantastic boulangerie also featured on Budget Travel’s Paris blog. There, I picked up a piccola baguette, and promptly ate half of it on the walk home. It was fluffy on the inside, and crusty on the outside. In other words, parfait.

People always wonder how French women eat like they do (and I did today) and don’t get fat. Let me tell you…it’s the stairs in the metros and in Montmartre. So much for not buying anything today. After all that walking (and climbing), I decided, I earned it.